(also known as the Camp Church)

This Grade II listed building became redundant in 2007, when a new garrison church had been built elsewhere. At the same time, many other Victorian barrack buildings also became redundant.

An archaeological survey has already been done of the land on which the church stands; which also happens to be a military cemetery from the Napoleonic period (late 18th century). This survey was presumed (by most) to be a precursor to demolishing the church and building blocks of flats over the cemetery. The owner of the land was Taylor Woodrow, who said that they had no plans to build on the land.

Here are a few pictures of the building. 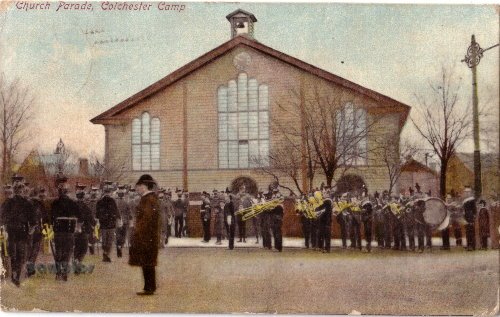 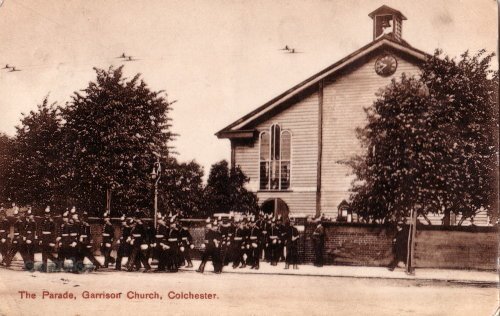 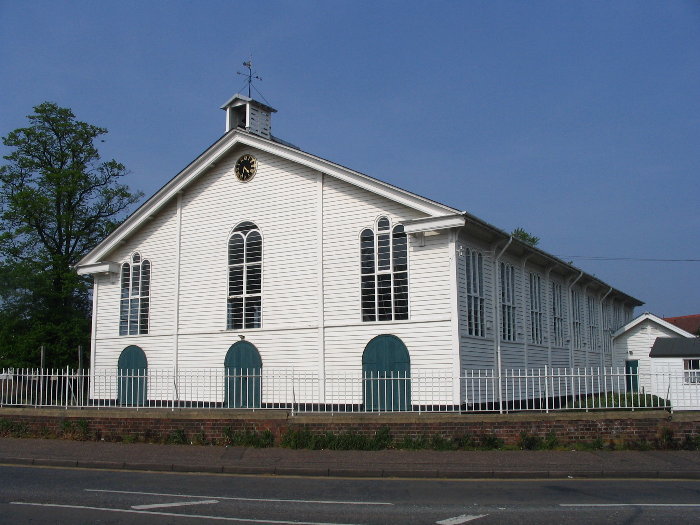 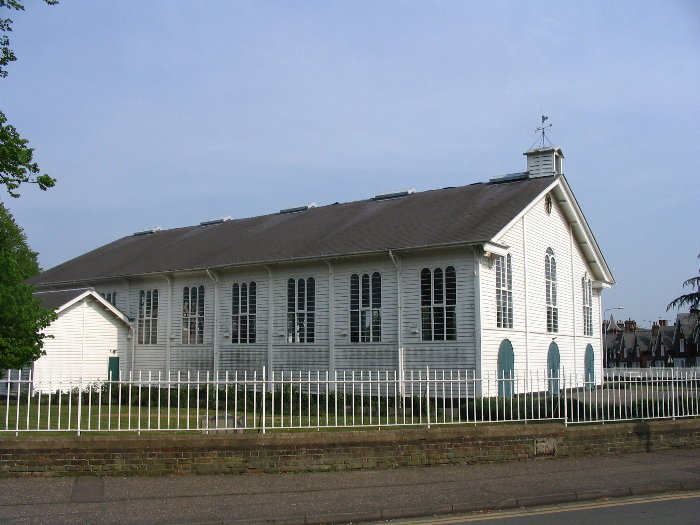 WARS are easy to start, but hard to finish. "Over by Christmas," they said in 1914. Not to mention Iraq in 2004. Much the same happened with the Crimean War, long, long ago. Well 1854-56, if you're doing A-level. Historians now agree the Crimean War was unnecessary. So did a few people at the time.

The Crimean War changed Colchester. Unable to shift the Russians from Sebastapol, Britain recruited foreign mercenaries - Swiss, Belgians, but mostly Germans. They called this multi-national force the German Legion. Then the Tzar of Russia died and the war ended. So the German Legion was not needed at Sebastapol, nor were 275 pre-fabricated wooden huts made for their use. These were hastily erected in Colchester, pending the building of new brick barracks. They housed 3,000 "Germans" (12 men per hut), with a further 2,000 stuck in tents on what is now the Recreation Ground, surrounded by a very high fence, for punch-ups with locals were feared. Overlooking them was the first permanent piece of the garrison - the Garrison Church, also pre-fabricated, held together with 12-inch bolts, still in position today. Its first official building, the Garrison Church, is today the only survivor of those Crimean War days, still, thanks to Army care, in remarkably good condition.

A complete refurbishment in 1988 found its pitch-pine timbers in very good condition. Now it is facing a crisis. Is Colchester, and the Army, really going to allow it to go to rack and ruin, risking vandalism or, worse still, fire? For this is also the only surviving wooden garrison church in Britain -- all the others have gone up in smoke over the last 100 years. Because it was wooden and dated from 1856, a tradition grew up that the church began life as a hospital, destined for the Crimea, but rejected by Florence Nightingale. This tale was even told by tourist guides at the Florence Nightingale Hospital at Scutari in Turkey. Actually, pre-fabricated wooden hospitals were built for Scutari by the same firm which made the wooden Garrison Church -- so the confusion is understandable.

Perhaps if it had been a Nightingale hospital, we would be more concerned about its future. In fact, our Garrison Church carries a more curious story: the German Legion. Far from wrecking the town, they proved popular, especially with shop keepers and girls at the silk factory in Northgate Street, Colchester's largest employer. Now the war was over, the Legion was to be disbanded - to Germany, then not a single country, but 12 small states. Many of the Iegion did not wish to return. Many, in particular, had been political activists and faced potential imprisonment. They became asylum seekers. A few married local girls and were able to stay. Their descendants still live in the town. For the rest, the British government offered free passage to The Cape (today, South Africa, then a British colony) to settle there and act as a local militia. Preference, however, would be given to those married.

Suddenly, girls from the silk factory and local shops were in demand. One enterprising legionnaire made it to Hamburg and back for a wife. In two weeks, more than 150 marriages were recorded, many in the Garrison Church. On the final Sunday, the Lutheran pastor married 64 couples. No-one had noticed that the church was not licensed for marriage, forcing a future Cape Parliament to pass a law legalising these marriages. The remaining Germans, meanwhile, were shipped from Harwich in batches of 500, many protesting (probably correctly) that they were engaged to Colchester girls.

The lucky ones bound for the Cape were moved to Gosport, prior to boarding ships. Here, there was a riot, in which their colonel joined, protesting that, though newly married, they were being restricted to "only one hour's intercourse per day" with their new wives. I am sure you realise the expression had a different meaning then. Four hundred marines were called out to restore order.

Does the story end there? No. Descendants of the German Legion still live in South Africa, England and, indeed, Germany. The Anglo­German Society in London has a large mailing list. They research their ancestors, they come on pilgrimages to Colchester to see the Garrison Church. Already, the e-mails are humming. I had one last week from South Africa appealing for information about the terrible news that the Garrison Church might be destroyed. Well, it cannot: it is a listed building. But like St Mary's, like Severalls, like a host of earlier buildings, it can die from passive neglect.

With heritage comes responsibility. The Garrison Church is a key historic building. Museums cost money and our cash-starved public sector cannot afford another one. This, however, does not prevent both town and garrison making a serious effort to find the church a new, acceptable use.

It is time for a bit of public responsibility, not buck-passing.

From the Victoria County History

In 1804 land in Military Road was bought as a military burial ground; in 1856 the garrison church, a timber-built, slate-roofed building for 1,500 men, opened on the site. The church was restored in 1891, the work perhaps including the replacement of the original slate roof by one of tarred felt, and again in 1989 when the roof was reslated. (fn. 24)

Happily, the fate of the church had a happy conclusion when the Russian Orthodox Church took it over, thus safeguarding it from one of those arson attacks that so often happen when a fully insured heritage building stands in the way of housebuilding - the Sergeant's Mess, the Garrison Gym, Severalls Hospital, Tubwicks, etc.

for further information, please send an