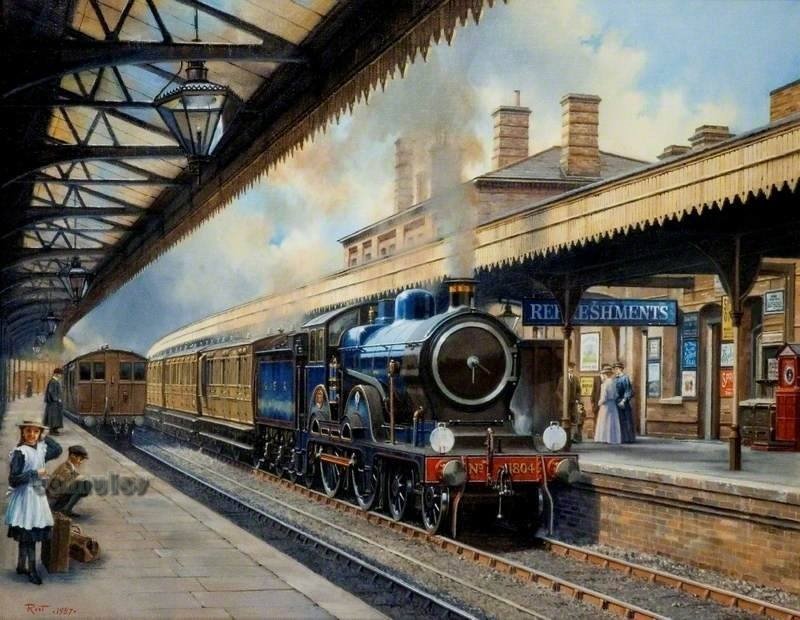 It was James Watt who made a small change to Newcomen's steam engine in 1765 which led to Stevenson's Rocket being chosen in 1829 as the best design to power a much awaited national railway system. The writing was on the wall for the horse powered carriages that had, for centuries, plied their trade on the country's roads. This led to the first railway system in London, the London and Greenwich line, built between 1836 and 1838. It didn't take long before Eastern County Railways built a line through to Colchester in 1843. The line eventually extended to Ipswich in 1846 and to Norwich by 1849.

After a couple of years constructing our section of railway from Brentwood, with various disasters and setbacks along the way, the company finally announced that the opening would be on Wednesday 29th March 1843. As might be expected from our Victorian forefathers, the directors, chief engineers and principal officers were invited to a reception at the Moot Hall (the one before the one before the one we have now), as were members of the public; the latter upon the purchase of a ticket from the Cups Hotel next door. Sure enough, the great and good of the said railway company set off on their journey at 11am from the terminus at Shoreditch 'at a good, although at not a very rapid, rate' to convey them all to Colchester. With a short stop at Romford, they completed the journey in 2 hours 40 minutes, and at the various stations and bridges along the way, crowds of the inhabitants of the nearby villages had gathered to cheer the train through. At Witham, a music band that had set up there, was taken aboard into one of the carriages and, 'by playing some popular airs, lent an additional charm to this most agreeable trip'. At Colchester they were greeted by several thousand people who had gathered to witness this momentous occasion, 'with numerous flags and merry peals from St Peter's church, giving the appearance of a general holiday'. Omnibuses and coaches were waiting to convey the directors and their friends to the Moot Hall, where 90 gentlemen sat down to their 'déjeune à la fourchette'. By 3.30pm, after a session of mutual back-slapping, they were all off again, for the return journey to London. One must assume that they arrived safely.

Here is the newspaper announcement. 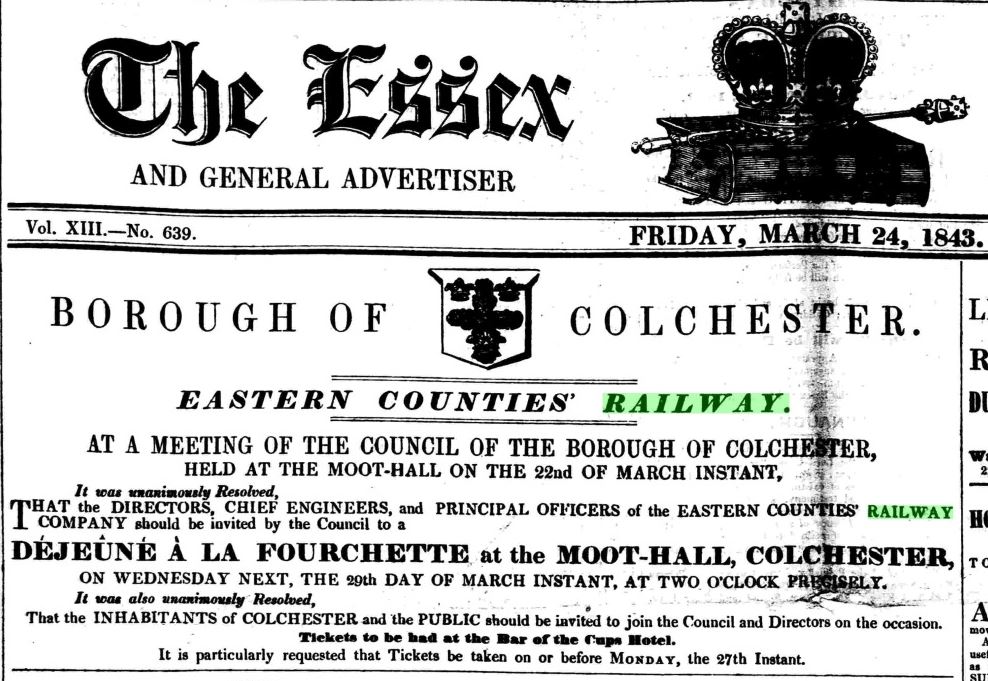 ....together with a timetable of the new trains. This was a time of great excitement, with fortunes being made and lost by investors from all walks of life. 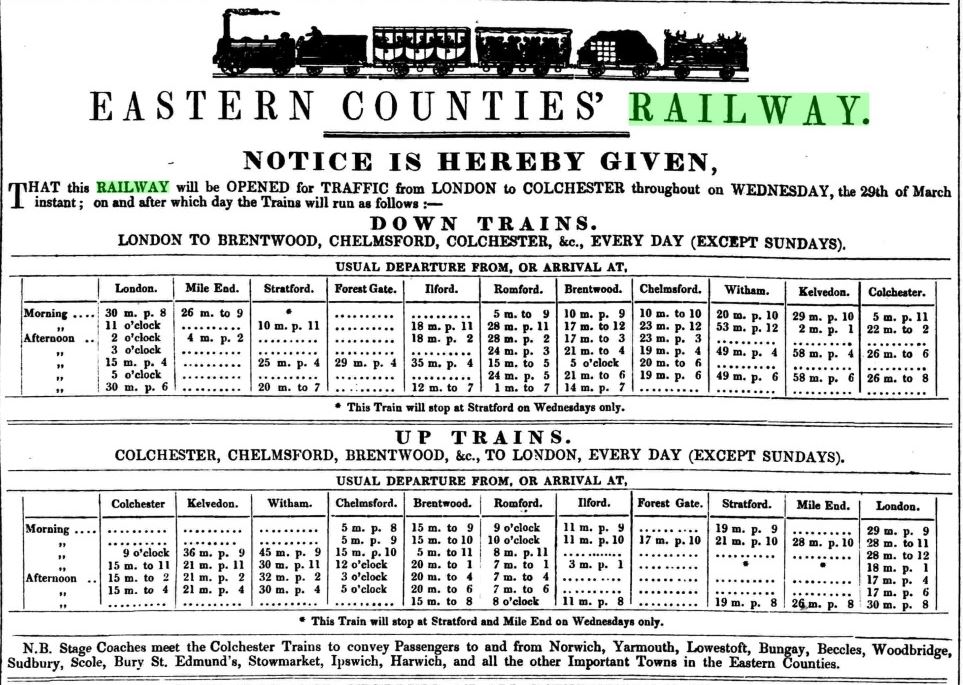 With the local hoteliers offering omnibuses to convey railway passengers into town, to their hostelries, much to Mr Peto's irritation, no doubt. 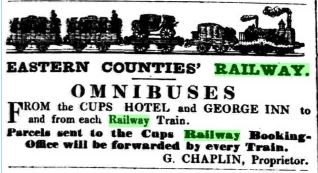 showed a fine etching (no photographs in those days) of the new Victoria Hotel. 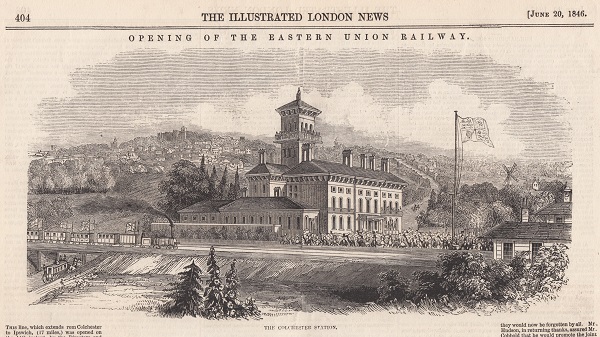 This was soon followed by letters to the press by the 'usual' complainants, just as we have today. Running trains on a Sunday,flying in the face of God, profanity of that holy day, a contrast of lusty and vigorous youth with feeble senility, etc. 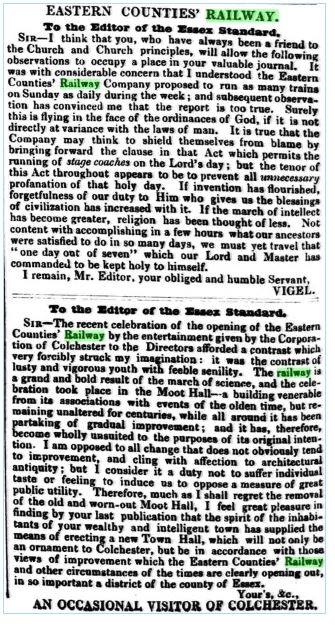 Here we have a part of a newspaper account from 1843 of the opening of Colchester's railway.

Later that year, William Wire wrote in his diary, 'when I was walking up Balkerne Hill, I saw that a portion on the north side of the Balkerne Gate had been destroyed in order to build additional rooms to the King's Head Inn to command a view of the railway. What a pity that one of the best preserved remains of Roman times should be destroyed to administer to the sensual pleasures, as it may be considered only as a decoy to induce persons to enter the house to drink.' He was, of course, referring to the landlord of the modern day Hole in the Wall pub's response to the arrival of the railway. You can see where the hole was made in the following picture, a window where once the Roman gateway structure once was. This afforded the omnicab drivers to take their ease in the pub's bar, and watch for the trains to arrive, before downing their drink and heading down to, hopefully, ply their trade. 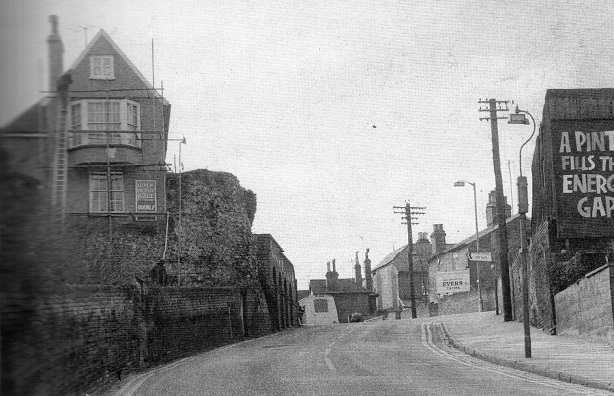 With this new mood in the town, the Moot Hall was destined to be demolished to make way for a new moot, or town, hall. So too was being planned a water canal from Wivenhoe to the Hythe to more efficiently convey barges to be met by the railway. That idea was never implemented. The town's inns and hotels were quick to organise omnibuses to bring customers from the station into the town, together with a parcel collection service, with both the Cups and the George hotels coming to an agreement with the Eastern Counties Railway. In the meantime a new Railway Hotel was planned, a splendid example of Italian architecture, which opened for the first time on Monday 19th August 1844.

The application for the licence at the time was made as the Railway Hotel, but on the suggestion of a member of the Bench, it was changed to the Victoria Hotel - in honour of the young Queen. It soon proved to be a profitless speculation. Incoming passengers, rather than being marooned on the outskirts of the town, sought the homely old fashioned comfort of the town's hostelries. It was, with the exception of the Victoria Tap, closed within a few years. A branch of the Earlswood Asylum occupied the empty building in 1850, and nine years later it was taken over by the Royal Eastern Counties Institution. Thus began Colchester's pioneering reputation for the treatment of mental health issues - but that is another story. Meanwhile, the town's railway went from strength to strength.

a collection of images dating from the 1900s to the modern day.

These are all copies of original photographs, modern digital images and some Edwardian postcard images.

The renaming of a diesel locomotive on 18th October 2002 at Colchester North Station,

with Sir Bob Russell, MP for Colchester, and supported by

The Colchester Town Watch, civic bodyguard to the Mayor of Colchester. 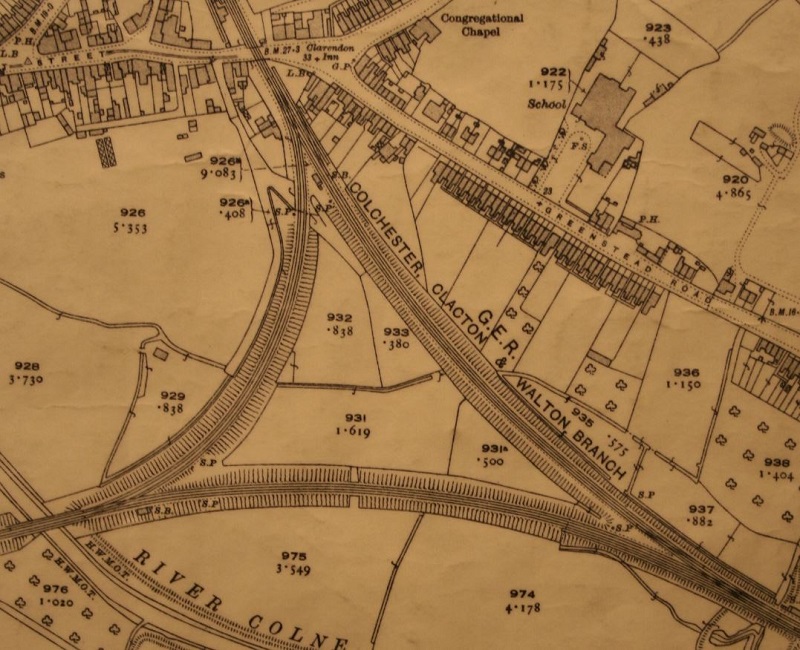 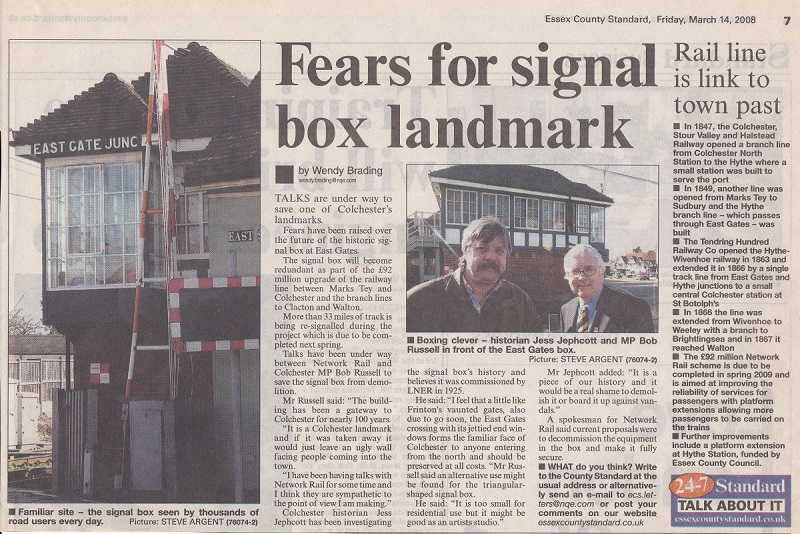 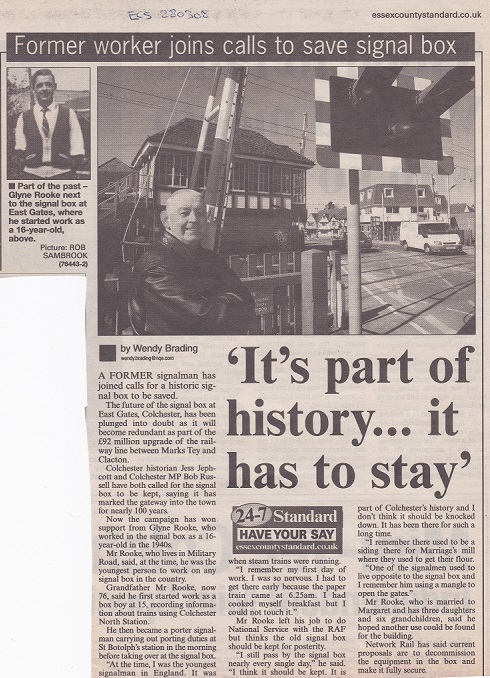 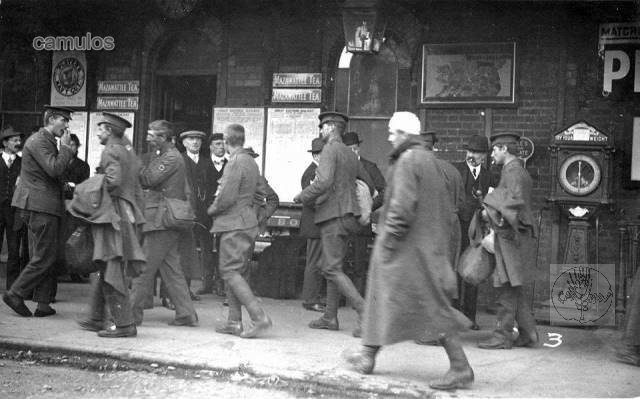 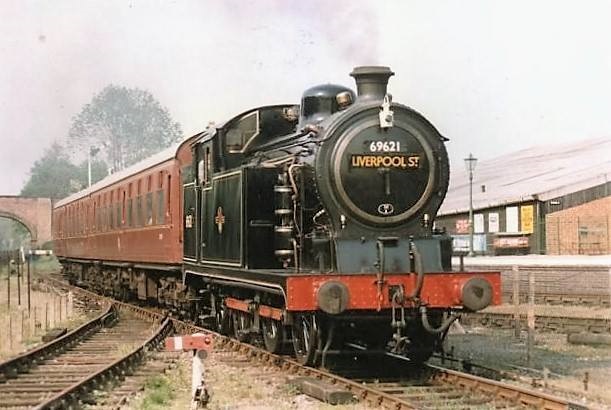 The loco In the picture is based at the East Anglian railway museum at Chappel. The building to the right is their workshop which has been built long after the the line beyond Sudbury was lifted. (Nick Baker - September 2016)

This was the last locomotive built at Stratford Works, East London, in 1922 before grouping into the London & North Eastern Railway in 1923. With many others of the N7 class it worked suburban services from Liverpool Street and many East Anglian branches and were thus seen in and around Colchester. Most of the class were withdrawn as the suburban lines were electrified around 1960 but a few saw out Great Eastern Steam in September, 1962. Upon withdrawal 69621 was purchased by Doctor Fred Youell, a University Lecturer at Leeds. After storage at Leeds Nevill Hill sheds it moved to the embrionic Stour Valley Railway Museum at Chapel & Wakes Colne station where it was restored to working order by volunteers. This locomotive has worked at various preserved railways and on the main line. The Stour Valley Museum is now the East Anglian Railway Museum. Doctor Youell deeded the loco to the Museum Trust before he died. The photo, yes, is taken on the Museum running lines at Chapel & Wakes Colne - the Liverpool Street sign is there for show. The engine needs lots of money spent on it to bring it back into service. (Chris Hazelhurst - September 2016)

In 1904, trams were introduced to Colchester. A terminus was located at North Station, in front of the Railway Tavern public house. This gave rail passengers an ideal means by which they could travel to the town centre, from the station. 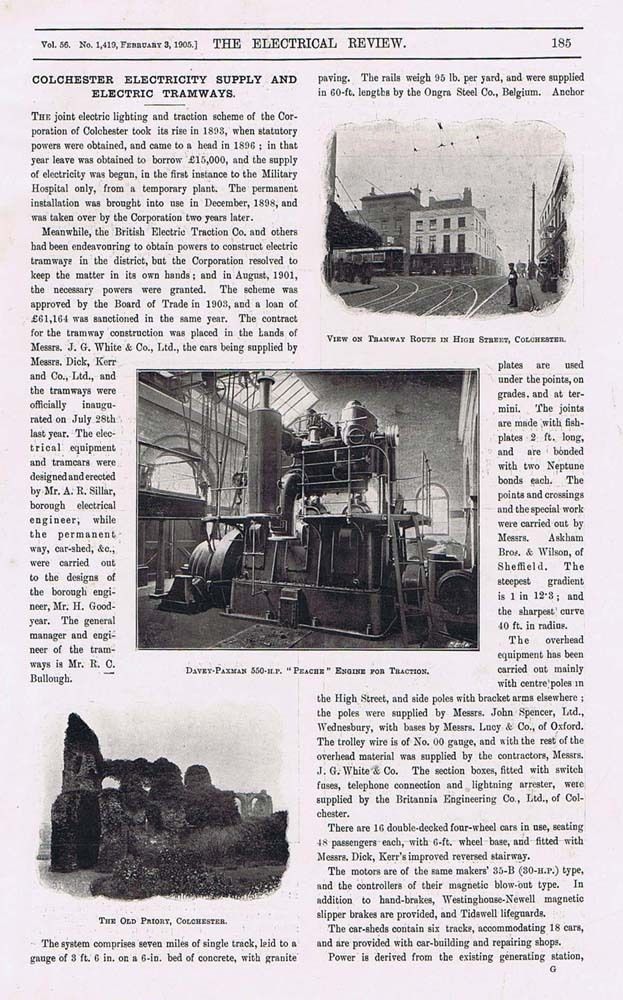 We will add more images in due course.

Please let us have your comments about these pictures.