Here follows a list of the 21 Colchester men who are believed to have fought at the Battle of Trafalgar in 1805. These have been discovered and researched by Joan Soole in 2005 from records at the Public Record Office in Greenwich.

The tomb structure in Holy Trinity churchyard belonging to 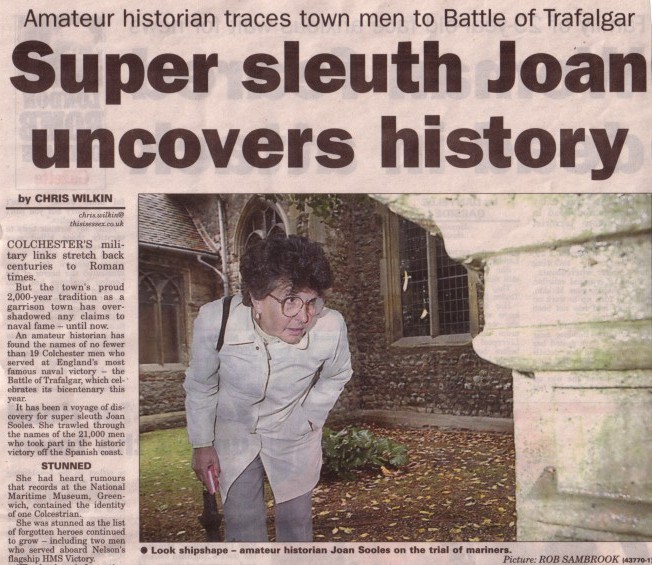 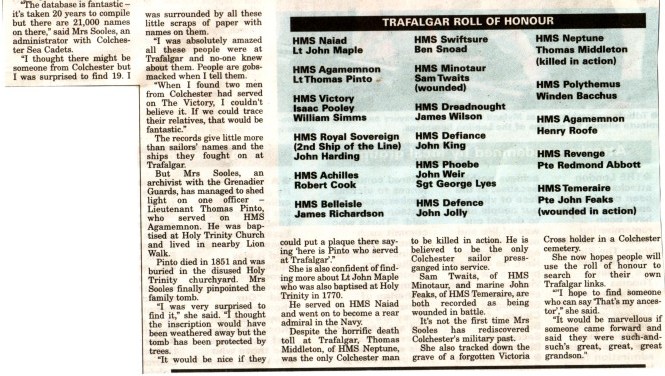 We are hoping to find out a little of the lives of each of those named, especially any descendants of those listed.

The Battle of Trafalgar

At 1.25p.m. Lord Nelson was mortally wounded while walking the “Victory’s” quarter-deck with his flag-captain, and by 3p.m. the firing had diminished. At 4.40p.m. Having learned of the completeness victory, the British Commander-in-Chief quietly and without a struggle ceased to breathe. By 5p.m. the fight was over, the fleet being 8 miles N.W. by W. of Trafalgar. The British lost 449 killed, which included Vice-Admiral Lord Nelson, 2 captains, and 34 officers; and 1241 wounded which included 106 officers. The British ships suffered severely in the hulls, and many were wholly or partially dismasted. The Franco-Spaniards lost 18 ships captured, of which 1 blew up. It appears that the enemy lost about 7000 killed and wounded, which included two admirals and seven captains killed. The remainder of the allied fleet managed to escape, and six months afterwards the French commander-in-Chief, Vice-Admiral Villeneuve, died at Rennes (it is said by his own hands), and was buried without military honours. Of the 17 prizes 2 sank, 6 were wrecked and lost in a storm after the battle, 2 were burned, and 1 was destroyed.

One of the most decisive battles in the history of the Royal Navy, Nelson's defeat of the French fleet took place on 21st October 1805 off Cape Trafalgar and was conducted with not a single British ship lost, although few ships escaped severe punishment. Loss of life on both sides was tragically high.

(Supported by the frigates HMS Phoebe and HMS Naiad).

If you can help with additional information, please contact us by email.

From which much of the above information has been taken.

This page hosted by: